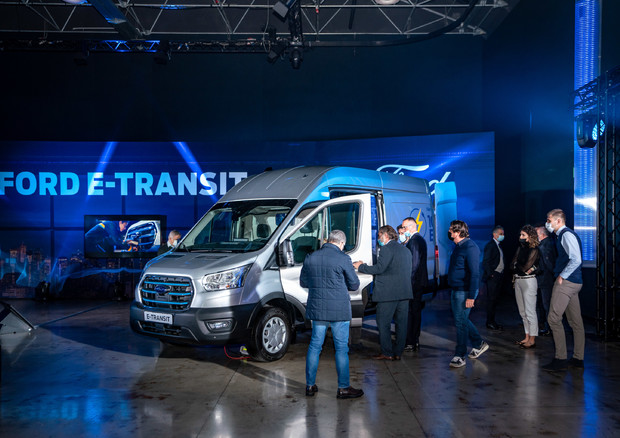 With e-Transit, Ford’s first fully electric commercial vehicle, the manufacturer of the Blue Oval has decided to rethink the world of commercial vehicles starting with sustainability and cost containment for users. Designed to be versatile, customizable and always connected, the 100% electric version of Transit enters the full electric world with the declared aim of offering its customers greater productivity but also innovative solutions for software and services, such as the Pro Power Onboard, and all the benefits of owning a fully electric vehicle.
“For commercial vehicles – commented Marco Buraglio, Ford Commercial Vehicles Manager – the electric already counts, it will count more and more and will develop faster than we think. Commercial activities are very planned and similar every day, with Fixed distances and calculable downtime. It is an activity with easily organized times, even for recharging the batteries. Very soon we will have an almost electrified range. The company believes in electrification and is concretely moving in this direction “. Thanks to the size of the battery, the range, the power of the engine and the possibility of using a system that supplies electricity without compromising the battery, the all-electric version of the best-selling van in the world promises performance that will satisfy even the most professionals. demanding.
“This vehicle has a history of over sixty years in the world – said Buraglio – and has marked important pages for our company. Today we enter a new era with an electric version that enters the market in a concrete way, because the engineers they have aimed to enter the heart of companies with a vehicle designed to maximize utility for those who use it. The load capacity is identical to the thermal version and recharging times are designed to minimize downtime “. With a usable battery capacity of 68kWh as standard, providing a driving range of up to 317kk, Ford E-Transit is designed to cater to a wide range of use by customers. The true capacity of the E-Transit is provided by the engine offering 430Nm of torque, with a choice of 135kW (184hp) or 198kW (269hp) of maximum power, deadweight up to 1758kg on the van and a complete range of 25 variants including van, double cab van and chassis cab with different lengths and roof heights and total mass from 3.5 to 4.25 tons.
“Satisfying a ‘commercial’ customer – added Buraglio – includes numerous aspects, starting from the needs in terms of load capacity and daily use of the vehicle, up to the optimization of the ownership experience. Precisely for this reason we are investing heavily in creation of service centers dedicated to commercial vehicles, able to accompany the customer and solve problems in practically real time. ” At launch in the spring of 2022, Ford E-Transit will provide all customers with complete standard equipment, in a single Trend package and with a significantly higher level of equipment than the equivalent diesel model.