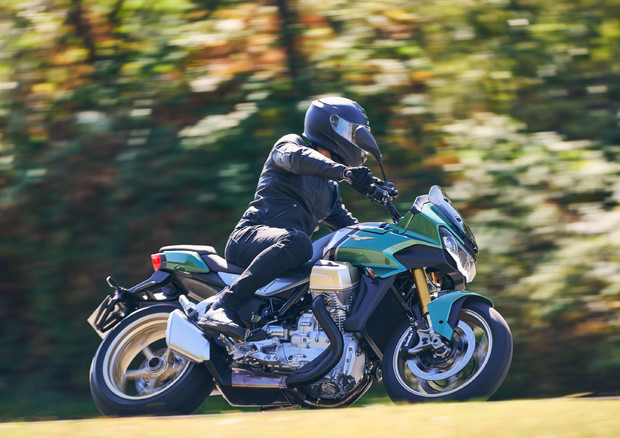 It is the bike that was not yet in the Mandello del Lario ‘nest’ and that opens a new era for Moto Guzzi. The new V100 Mandello, which Moto Guzzi is presenting to the public at EICMA these days, is in fact a new concept of motorcycle, but with all the characteristics that a true Guzzi must have, which opens a new chapter for the car manufacturer. Aquila, bringing it in fact towards its second hundred years of history. It is the first motorcycle in the world with adaptive aerodynamics and also the first Moto Guzzi that benefits from semi-active suspension, inertial platform, cornering ABS and liquid cooling. A revolution in the name of the future, but with all the Guzzi history inside and out.

The V100, with its official debut currently scheduled for summer 2022, will be the Moto Guzzi that has never been, characterized by cutting-edge technologies and an open door to the future. “From a technical point of view, the V100 Mandello is a keystone for Guzzi’s future – commented Alessio Sisi, Head of Project Management & Advanced Engineering – with a completely new engine and an equally new vehicle built starting from the engine itself. It was a great challenge that we think we have won. We didn’t think only of a model but of a bike that would open a new cycle and a future of further developments that we will see in the coming years “.
The design is also completely new, which however, in its being receptive to the future, retains all that represents the best of Guzzi history, such as the shapes of the tank that seem shaped directly from the engine heads, but also the underseat side panels, an explicit reference to the Le Mans of 1976. “We are entering a new century – commented Marco Landri, Head of the Style Center of the Piaggio Group – with a modern style and the stylistic language also adapts. We designed the V100 around the engine which is also modern from one point from a stylistic point of view. The great ally in designing the V100 was the wind, because from the aerodynamic point of life we ​​were able to obtain absolutely innovative contents. As a designer, the wind tunnel has allowed us to obtain fluid shapes and lines “.
Moto Guzzi V100 Mandello will be a turning point in the history of the brand, with many important technological innovations: it will be the first motorcycle with adaptive aerodynamics, the first Moto Guzzi equipped with advanced electronic solutions such as the six-axis inertial platform, cornering ABS, semi-active suspension and the quick shift, just to name the most important. Tradition is respected by the 90 ° transverse V architecture of the twin cylinder, which guarantees the classic ‘Guzzi’ way of delivering torque and that characteristic sound of the Mandello eagles.
The design from scratch has resulted in a compact and lightweight engine, 103 mm shorter than the small block of the V85 TT. The new twin stands out from all the recent engines built in Mandello del Lario for the heads rotated by 90 degrees, a choice that allows to increase the habitability on board.
The actual displacement is 1042 cc and, if the sporty soul of the V100 Mandello can be guessed from the shapes, the traveler’s attitude is also guaranteed by the high comfort offered by the generous saddle and the riding position. Active aerodynamics, which allows the windshield to be modulated and the flaps to be removed, also transforms the V100 into a real tourer. “It is a motorcycle without categories – commented Diego Arioli, Product Marketing Manager at Guzzi – with a new platform. The V100 is a roadster, therefore dynamic and fun to ride, but even if necessary it can increase aerodynamic protection and guarantee a comfortable ride. It is our transversal bike “.