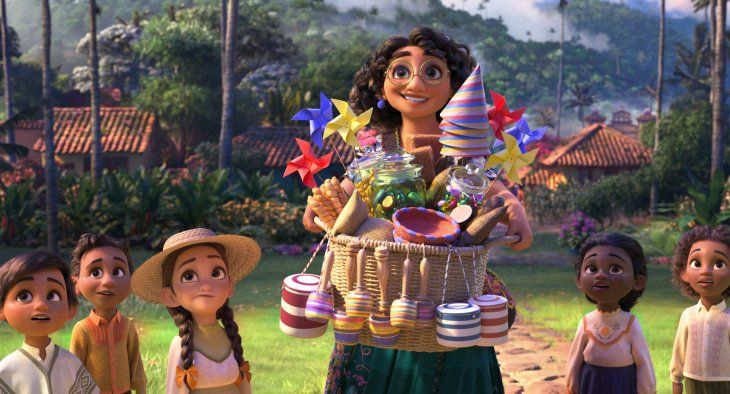 The film revolves around themes such as the family, the faith, the hope, the dreams and hopes of the new generations, and the social burden which implies possessing a gift. It is centered on a particular family, the Madrigal, almost all endowed with special gifts. The story in its beginnings goes back to the events that marked the destiny of Alma, the grandmother of the family, who by losing her husband to violence claims a place to shelter and protect her three babies.

After the supplication, they appear dozens of yellow butterflies, as in the book “One Hundred Years of Solitude” by García Márquez, and the woman sees a town emerge around her and a house that has a life of its own, a kind of remembrance of a colorful Macondo, of houses with flowery balconies. In that place his descendants grow, who every so often receives a gift, except for Mirabel, the only one of the Madrigal who apparently does not have it and but who could save the family and the magical gifts that each member has, without there being a villain on the tape.

The characters in the film are deeply Macondian; is the unattainable woman of exuberant beauty that flies through the air, is the midwife who takes care of the family, is the excess of nature, is the man who sees the future and there is reality reinterpreted in the key of magic. All that happens with the background of the Colombian mountains and a saturation of colors in the peasant clothes of the characters, in the Madrigal house, in the vegetation, in the multiplicity of flowers, in the wild animals and in the food.

Liliana valencia, who was part of the group “Confianza Cultura”, created by the filmmakers to understand Colombian diversity, He assured that the tape will mark a before and after in animated Disney films regarding issues such as beauty. “We are going to find that beauty is not only” Snow White “,” Sleeping Beauty “,” Little Red Riding Hood “, but Mirabel -a mixed-race girl with curly hair- has her own beauty and that is Colombia “, said Valencia.

The consultant explained that his role consisted of enhancing the afro beauty and he did it through the hair of several of the protagonists, given that the Madrigal family is multi-ethnic. “We wanted to break that paradigm that there is something wrong with afro hair”, emphasize the “diverse curls” that tend to be “more and less Afro” and endowed with an “imprint of African beauty”, explained Valencia.

In addition to being multi-ethnic, the film tries to concentrate several of the features of Colombian diversity: can be found the Caribbean world, the Amazon, the Andean, the Pacific area and the indigenous, African and Spanish heritages, in an attempt to create a stereotype marked by a prism of colors.