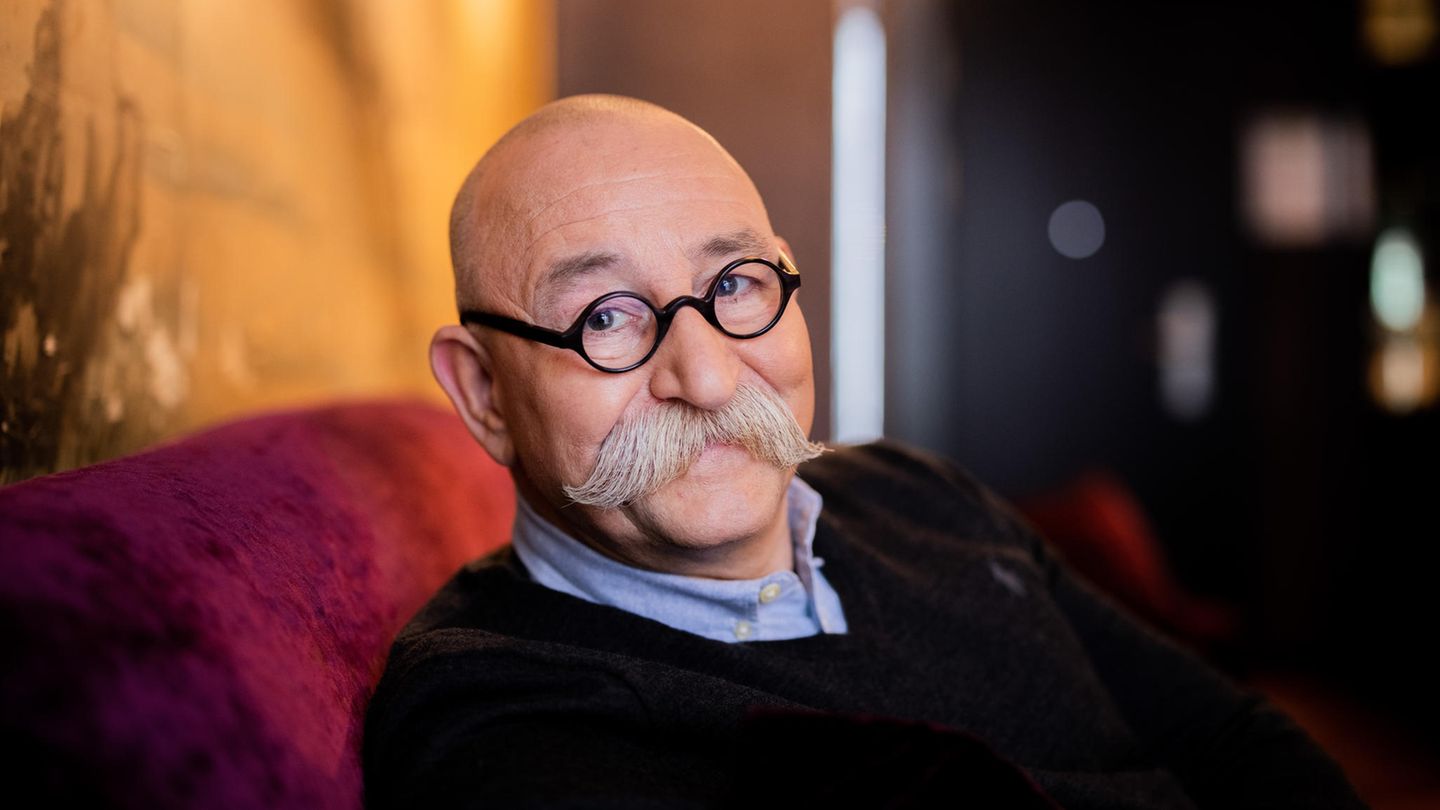 He is the face of the cult show “Bares for Rares”: Horst Lichter is celebrating his 60th birthday. How the all-rounder from a small Eifel community became a TV star.

Whenever you see the Horst on TV, you think you see a being from a bygone era. When smoking industrial chimneys stood for prosperity and a carefree future. Back when hunger was still called “Kohldampf” and fought with huge amounts of butter and cream. When men were still called Werner, Karlheinz or Horst.

Horst Lichter, that’s his full (brand) name, wears an imposing Kaiser Wilhelm mustache, the tips of which are artistically twisted up and point a good five centimeters upwards on each side – very old fashioned, but unmistakable. This magnificent beard, which agelessly ages its wearer, is its unique selling point. But what would the beard be without the Horst?

The all-rounder from a small Eifel community

At least it can be assumed that the eyrie was there first, for what feels like 70 or 80 years. However, it is only 60 years since this Horst Lichter saw the light of day on January 15, 1962 in the middle of the years of the economic boom in the Eifel community of Nettersheim. Apparently this corner is a fertile biotope for illustrious personalities: the polymath Heinrich Cornelius (1486-1535) came from here, as did the former DFB President Wolfgang Niersbach (71). Hape Kerkeling’s (57) fictional puke Horst Schlämmer was also up to mischief there.

Horst Lichter was and is a professional cook, author and presenter. Or you can choose the universal designation: entertainer. It is not uncommon to hear the opinion that it speaks volumes for the decline of German television that someone like Lichter was able to launch such a TV career. But that doesn’t do the man justice. In truth, he presents his gentle, Rhenish nature with a soft dialect, for which his audience loves him so much. Other TV greats who learned their job from scratch don’t have that.

Songs of praise for the jubilee

“It’s no shame when you call Horst Lichter the friendliest man on German television”. The miner’s son seems to be “the personified alternative to the uninhibited elbow society”: “Someone who doesn’t constantly perceive others as competition.”

The finest column in the German press, the “Streiflicht” of the “Süddeutsche Zeitung” (SZ), comes to the conclusion “that the dazzling job title ‘TV chef’ takes on a stale aftertaste for such a fellow”. For Lichter it’s like “like saying about Willy Brandt that people remember him because he was a good guitar player”. The SZ believes that Lichter’s life is an “adventure track rich in ups and downs that would have to be set up in Phantasialand near Cologne”.

He grew up in a working-class family in the Rhenish lignite mining area. After secondary school, he did a three-year apprenticeship as a cook because he thinks that people get along best when they eat together at the table.

At 19 he married, bought a house – and got into financial difficulties. The money he earns as a chef is not enough at all. He now works like his father in a briquette factory and after work five days a week at a scrap yard. During this time he also suffered the first serious blow of fate: his first daughter died of sudden infant death at the age of only six months.

When Horst Lichter was 26, he suffered a stroke. As he tells, among other things, on the Sat.1 show “Dinner Party – The Late Night Talk”, two years later he collapses again with a stroke combined with a heart attack. He decides to radically change his life.

His passion for collecting and cooking

Lichter resigns from the briquette factory and goes back to work as a cook. He opens the “Oldiethek” in a former dance hall and old car workshop. In the restaurant he lives out his passion for collecting and cooking to the fullest. He cooks for his guests in a chaos of antiques and junk. There is no menu, people eat what Lichter does best: genuine home cooking.

Business is booming, and it has to be, because Horst Lichter has an expensive hobby: he collects old motorbikes and cars. At times there is an Austin Healey, a Jaguar E-Type and an antique Opel GT in his garage. He himself says that he has owned up to 100 cars. Once, he snuck through a valley in the Eifel in his Ferrari 330 at walking pace, so that nobody would be annoyed by the distinctive sound of the twelve-cylinder. “But one day an old Eifel farmer asked me: ‘Can’t he or don’t you want to?’ That was the starting signal for me.”

At some point he has to realize that he is totally over-indebted. “I was miserable for a million euros […] That was a sum that scared me,” says Horst Lichter in “Dinner Party – Der Late-Night-Talk”. His current (third) wife Nada saved him at the time. She works as a waitress in Lichter’s “Oldiethek” and have scraped together all their savings so he could pay off his debts.

When the “Oldiethek” developed more and more into a cult restaurant in the 20 years until it closed in 2010, the media became aware of Horst Lichter, WDR made a first contribution – and discovered his entertainment talent in the process. Then things go off: Lichter becomes a ZDF chef, first every Friday in Johannes B. Kerner’s (57) “Kochshow”, then in the follow-up show “Lanz kocht!”

From 2006 he moderated the ZDF program “Lafer! Lights! Delicious!” alongside star chef Johann Lafer (64) for eleven years, he was involved in the “Kitchen Battle” and “But please with cream”. For the WDR he is with his motorcycle on “Lichter’s scavenger hunt” (seven seasons with 29 episodes so far), for the ZDF he is at the grill (“Germany’s largest barbecue show”), finally he lands, also on the ZDF, a mega success as Moderator of “Bares für Rares” (eight seasons since 2013, over 1300 episodes, market share around 25 percent). For this, Lichter was awarded the Golden Camera 2018 and the German Television Prize 2019.

Film adaptation of his biography

On top of that. He also writes, not just cookbooks. In 2014, “Here I am a human being: Stories that tell about life”, in the same year “Whoever steals here dies: Horst Lichter’s stories of a thousand and one lives”. In 2016 the book “No time for assholes” was published, in which Lichter wrote about a serious topic: his mother Margret’s cancer.

He describes how he returns to his parents’ house in Rommerskirchen to accompany his terminally ill mother in her final months. Two fundamentally different characters meet here: the harsh mother, who has made a life full of deprivation very modest but hard-bodied – and the cheerful son. She says: “Don’t be a dreamer, Horst, don’t always see the good where there is nothing good!” He: “If I don’t do that, what else is there to see, mother?” You: “The reality!”

The book will be filmed with the “original title “No time for assholes” and broadcast by ZDF last Sunday in prime time. Horst Lichter is played in the melodrama by actor Oliver Stokowski (59). : “I would never play myself. The whole film would no longer be believable. Actor is a learned profession. I can do nonsense, but I can’t act. Not everyone who can entertain five people around a campfire with a guitar is giving a concert.”

Stokowski convincingly plays Horst Lichter, who likes the original himself. A man who is thankful for what I had rather than being mad for what I was missing out on. If I had a heart attack in bed tonight and didn’t get up tomorrow, I would say, ‘Thank you for this great one Life.'” (Lights to “Image”).

And he plays a man who has found a formula for his life that anyone can follow, even in times when the term “do-gooder” is considered a devaluation: “Give what you would like. Politeness, friendliness and respect everyone wants it. Only then do you have the right to demand it. If you have that as a basis of life, not much can go wrong.”

1280 pages in 420 days: These are the details of the written Buwog verdict